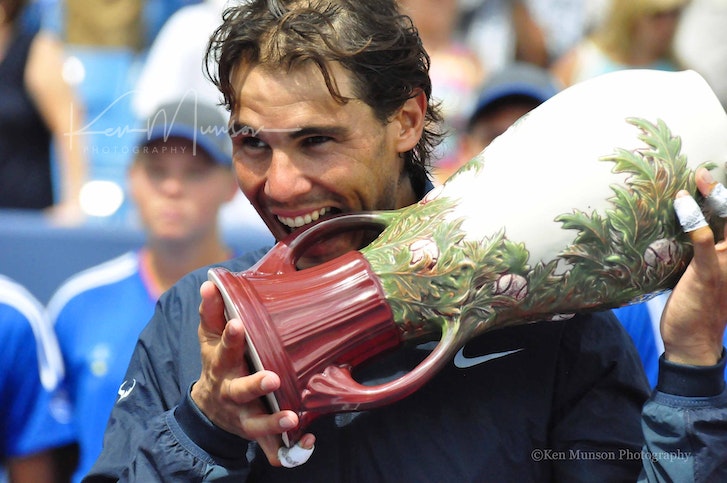 We're only a few weeks until the top 50 men and women from the ATP and WTA Tours take the courts at Cincinnati's premier tennis event, the Western & Southern Op. The tournament runs from  August 9-17th and the close-up intimacy of this venue affords just about everyone with an opportunity to capture great photos of their favorite players.  I will once again be shooting for World Tennis Magazine, spending long hours in the hot and humid Queen City summer temperatures on the court. By the same token, I encourage everyone to take the opportunity to improve their own photography skills by bringing your DSLR to the tournament and clicking away. That being said, I thought I'd share some of the lessons I've learned in my many years of shooting this game. If you're interested in pro-sports photography, you can put these tips to use. In addition, these tips apply to shooting players of all levels, so bring your camera to your area club or public court and snap away.

Don't Wait to See the Ball

Timing tennis action photos is not as straightforward as the uninitiated might think. The ball is traveling so fast, that if you wait to see it in your viewfinder, you've already missed the photo.

Instead, try using a timing technique to help you anticipate when to click the shutter. One of my favorites is to watch the player's muscles to move as he or she is about to swing. That will tell you that the player sees the ball coming, so you'll know it's coming too. Then fire the shutter quickly. If you have a newer DSLR that has a "continuous" mode setting, set your camera for continuous shooting and start firing before until after the shot. You can then use your LCD to play back and see the results of your timing. If you're exposing your image too early or too late, you can adjust on the very next point. You'll soon be getting the ball in almost every shot and will learn how to anticipate the action.

Don't Let the Player Get Between You and the Ball

Unless it's for creative reasons, don't shoot the player's back to the camera. . When it comes to action photography, that means you generally want to shoot forehands from the player's forehand side, and backhands from the backhand side.

Here's a simple rule to remember. Keep the ball between you and the player. Then he or she will always be looking towards the camera's direction when making the stroke. This will certainly help you achieve more dynamic results.

Don't Put Down Your Camera Too Early

Especially after long or important points, you can make excellent photos of the athletes reacting.

Their facial expressions to the real story. They yell, laugh, pout, scream, throw their racquets and pump their fists. Sometimes the joy and frustration they exhibit will tell more about the match than a hundred photos of great backhands, forehands, serves, and volleys.

Many photographers are so focused on getting the ball in the frame, they forget there are great photo opportunities during other moments of action. A good example of this is the follow-through.

When a tennis player hits the ball, the stroke is not over. Continuing to swing after contact is an important part of sound mechanics, right to the point of holing the racquet over the shoulder. It also provides a nice moment for the photographer - while the player is poised  between bursts of action, and the racquet neatly resting behind the head, eyes focused on the ball, and the opponent outside the frame. If their hair or clothes are flying, even better.  So just like a good golfer or tennis player - remember the follow-through!

One of the first lessons a developing photographer learns is to pay close attention to the background. There is a big difference between taking the shot and making the shot. A little pre-planning will help you turn a good picture into a great photograph if you just take the initiative to think about your background before firing away.

There is a time for excellent detail and depth of field, a time for blurring out the noise in the background, a time for a solid screen to bring attention to the athlete and time to market your photos.

Use a small f-stop (Between f11 and f22) to not only focus on the player and the action, but the background can also tell a story. In the photo above, it is fairly obvious that Rafa has just won the 2013 Western & Southern Open, but the reaction of the fans clapping, smiling, and cheering in the background is like placing an exclamation point after a sentence.

Removing the noise or blurring the background in the Sloan Stephens shot above helps place the emphasis on the athlete. The viewer isn't bother with distractions in the background that quite possibly could take away from the impact of the photograph. In this instance, it is fairly obvious what just transpired on the court. The composition of the photo and the blurred background makes the message clear.

There is also a point in time when you merely want a solid background to magnify the action and the athlete. In the example below I have used a long lens from the top of the stadium court in an effort to use the green background of the court to frame John Isner. I also used this angle because John is nearly 7 feet tall and it's not always easy to get his entire body in the frame from courtside. Nevertheless, you can see how the solid color background of the court provides a wonderful canvas for this photograph. There are no people, water bottles, ball kids, towels or stray racquet bags mucking up the shot or taking the focus away from the athleticism of the player.

Focus on the Eyes

Photographing a tennis match can be difficult at times because there are so many things going on the court, in the background, foreground and with the movements of the players. If you are not careful, your auto focus mechanism of your camera will focus on the least important aspect of the shot. A simple rule to remember is "Focus on the Eyes."  If the eyes are in focus, chances are you'll be on your way to taking great photos.

As you can see in the above photo, yes, I've captured Victoria Azarenka at the exact moment of striking the ball, but for all intent purposes, the real story is in her facial expression and the effort that she is putting into her forehand. For this, I've tried to focus on her eyes or eye brows. That being said, the clenching of her teeth, the popping veins in her neck, the squint of the eyes, and perspiration on her shirt are all in focus and tell the viewer that she is giving 150% effort on every stroke.

Use your foreground and backgrounds to market your photos. A secondary income source for many professional photographers is sponsor signage opportunities. Sponsors invest a lot of marketing money in their sponsorship and will often welcome being contacted by a photographer who has captured both the essence of a celebrated athlete with their corporate logo or brand name.  In the example below,